No Earth Without Art 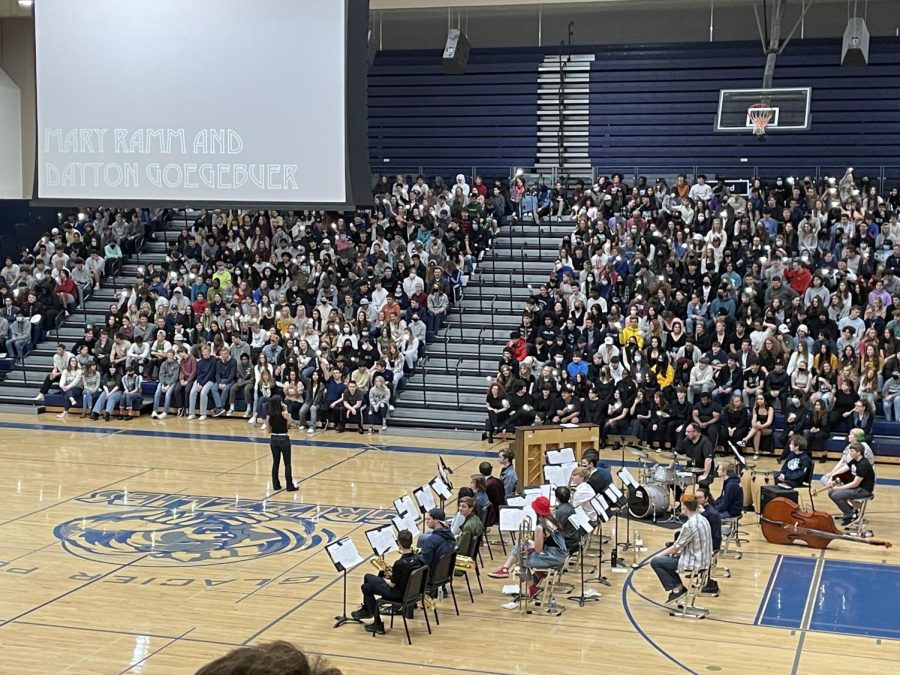 This year’s spring spirit week was followed by an Art Assembly that was filled with captivating performances and heart-warming reveals. While the students filled the bleachers, the jazz band played. Once the music and chatter settled down, Mrs. Corwin introduced the color guard. The entirety of the student body and administration stood as the colors were displayed and the national anthem was played. The pledge of allegiance was then recited and the audience waited until the color guard exited the gymnasium before taking their seats.

Then, the Harmonic Hermans were introduced and they sang the Irish tune, “My Wild Irish Rose” by Chauncey Olcott. The crowd cheered while the choir set up to perform. Once the crowd settled down once again, the choir performed a beautiful rendition of “The Birds Lullaby” by Emily Pauline Johnson. Once the crowd finished cheering at their performance, the Shack Awards for the Black and White contest. Afterwards, Tigan Ridgeway sang and played along with the guitar as he performed “Go as we Grow.”

After Ridgeway completed his song,  the crowd cheered and jammed along as the Jazz band played “Car Wash” by Rose Royce. Soon after, Kaitlyn Ipsen went to the middle of the gymnasium floor and performed a tap dance to “Feeling Good” by Micheal Bublé. The crowd cheered and screamed as she finished her dance. Once she finished and began taking her seat, the cast of Cinderella set up a set and performed “The Prince is Giving a Ball” and “Now is the Time” from the musical. Though some of the cast came down with a sickness, not covid related, the leads and ensemble sang and danced their hearts out in front of the audience.

A few minutes later, Dayton Goebebuer and Mary Ramm performed an original song called “Let Me Know,” which then dropped on all streaming platforms the same night. “It’s always been what I wanted to do, so I’m hoping at some point I can do it as my only job and make a living off of it,” Goebebuer said.  While they played the duet, the students put their flashes on, despite some administration side-eye.

After they embraced each other for their work well done, Erika Cho took to the stage and performed a rendition of “Can’t Help Falling in Love” by Elvis Presley. Following her song, Amelia Hirano-Holcomb played their guitar, while also singing a cover of “To The Mountains.”

Once the performances were over, Delany Gaffney took to the podium and announced that the Yearbook reveal was finally here. The video reveal, made by Lillyana Brastad, featured the highlights of the year while “Everybody Talks” by the Neon Trees played. The cover of the 2021-2022 yearbook was highlighted at the end while the crowd cheered.

The Arts Assembly was a success after a two-year hiatus due to Covid. The singing, dancing, band, choir and artwork showcased the talent of our peers and the audience enthusiastically cheered all the performers on.