Roe v. Wade Could be Overturned this Summer, According to New Supreme Court Draft Decision Leak 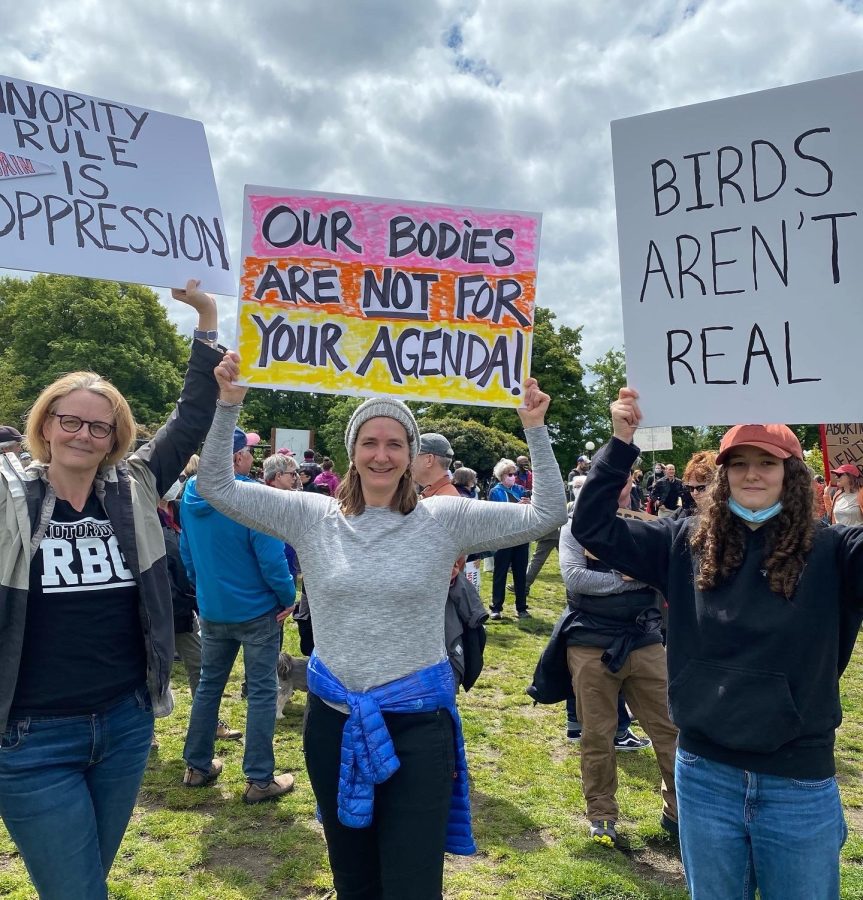 Protesters at the local rally at Cal Anderson Park in Seattle on May 21.

On May 2, readers were shocked when political journalism website Politico leaked a Supreme Court draft of a decision to overturn Roe v. Wade. It is unknown how Politico gained access to the 98 page document. The draft is unwavering in its decision to abrogate the 1973 Supreme Court Roe v. Wade decision that guarantees pregnant women the right to an abortion without excessive government regulation.

The topic came into the Supreme Court’s spotlight due to the pending Dobbs vs. Jackson Women’s Health Organization case regarding the constitutionality of a 2018 Mississippi law, which prohibits most abortions after 15 weeks of pregnancy. Lower courts had ruled that the law was unconstitutional. The state of Mississippi has requested that the Supreme Court uphold the law, and overturn Roe altogether. The initial Roe v. Wade decision uses the Due Process Clause of the 14th amendment, which provides a fundamental “right to privacy” that protects a woman’s liberty to choose to have an abortion. Mississippi argues that there is no inherent right to an abortion in the Constitution.

Many students have had a strong reaction to the leaked document, some concerned, some optimistic, but everybody was shocked. “If R.V.W. is overturned it’s going to be the downfall of the country but specifically women…women are in danger,” senior Seanna Shissler said.

Madeline Floren was feeling similarly. “It is honestly scary if they can overturn something from the 70’s allowing basic human rights. What else are they able to do,” Floren said.

GP graduate Laura Weaver has a different view on the draft. “I hope that we can end abortions, and I hope that this causes less resources to be used in the abortion fight so we can use more resources to help mothers in need, children in the foster/adoption system, and all other aspects of life after birth,” Weaver said.

Former United States President and First Lady, Barack and Michelle Obama, released a statement via Instagram defending Roe. Shortly after, President Biden followed suit, saying that he would fight for Roe and women’s rights. He urged voters to elect more pro-choice officials into office during midterm elections this November. “At the federal level, we will need more pro-choice Senators and a pro-choice majority in the House to adopt legislation that codifies Roe, which I will work to pass and sign into law,” Biden says in his statement.

Danielle Peterson approved of the President’s statement. “I think what he is trying to do is necessary to maintain equal rights for everyone. Women should not be told what they can and can’t do with their bodies, especially when it doesn’t affect anyone but them and the father of the child,” Peterson said. Floren and Peterson agree. “I think the way he responded was well executed,” Floren said. “I do believe everyone should have a right to choose when it comes to bodily autonomy whether it be male or female. This does include the right to a safe and legal abortion. Overall he did a very nice job without attacking anyone!”

There are many messages and statements that take away from the leaked document itself. In the first lines of the document, Justice Alito ( appointed by George W. Bush in 2006) wrote, “Abortion presents a profound moral issue on which Americans hold sharply conflicting views. Some believe fervently that a human person comes into being at conception and that abortion ends an innocent life.” Then the document goes onto give the counter argument of, “Others feel just as strongly that any regulation of abortion invades a woman’s right to control her own body and prevents women from achieving full equality.” Alito went onto write, “Roe was egregiously wrong from the start. Its reasoning was exceptionally weak, and the decision has had damaging consequences. And far from bringing about a national settlement of the abortion issue, Roe and Casey have enflamed debate and deepened division.”

According to a poll conducted by Pew Research Center, 61% of Americans believe that abortion should be legal in all cases. Only 12% of Americans believe that abortion should be illegal in all cases, and 26% think it should be illegal in most cases. Protests against the Supreme Court draft have taken place nationwide. Students’ social media has been flooded with content regarding Roe, both supporting and condemning it. On an @alltheedgegp Instagram story post, students responded with their feelings about the draft. “I’m disappointed,” Ashlyn Peterson wrote. “I think it’s so stupid it’s a possibility. I think it’s so stupid they’re trying to take our rights away,” Amelia Holst wrote. “I personally would never choose abortion, but I get the reason for why people do it. I think everyone should have their own rights to do what they want to do with their own bodies,” Makayla Bridges said.

If this draft were to be passed, it is likely that 24 U.S. states would ban abortions immediately, 13 of which already have “trigger laws” in place that would ban abortion instantly if Roe v. Wade were to be overturned. Not to mention the many states that have already forced very strict anti-abortion laws into effect. Oklahoma Republican Governor, Kevin Stitt signed an “effective immediately” law on May 25th, 2022, that prohibits abortions at all stages of pregnancy. Michigan has a pre-Roe total abortion ban that has been temporarily blocked pending a final state court ruling later this year. Republican South Carolina Gov. Henry McMaster, said he would support a much harsher anti-abortion legislation that makes no exceptions for rape or incest. In Texas, abortion is legal up to six weeks after the last menstrual period. In 2021, the state adopted a trigger law that would ban almost all abortions if Roe v. Wade was overturned. In Washington, abortion is legal up until fetal viability. In 1991, the state voted to codify the right to abortion.

In addition to the many abortion restrictions, many conservative lawmakers and politicians are considering placing restrictions for birth control methods and Plan B pills. The right to contraception and Plan B options, are protected by two Supreme Court cases: the landmark 1965 ruling in Griswold v. Connecticut, which found that married couples had the right to use birth control, and a subsequent 1972 ruling in a case known as Eisenstadt v. Baird, which extended that protection to unmarried people.

This is  a developing story, and it is likely a follow up will come out when the Supreme Court decision is announced as it affects our community.