A White Person’s Guide to Allyship

It's time for the white community to stand up against racism. Here are a few possible ways to do just that. 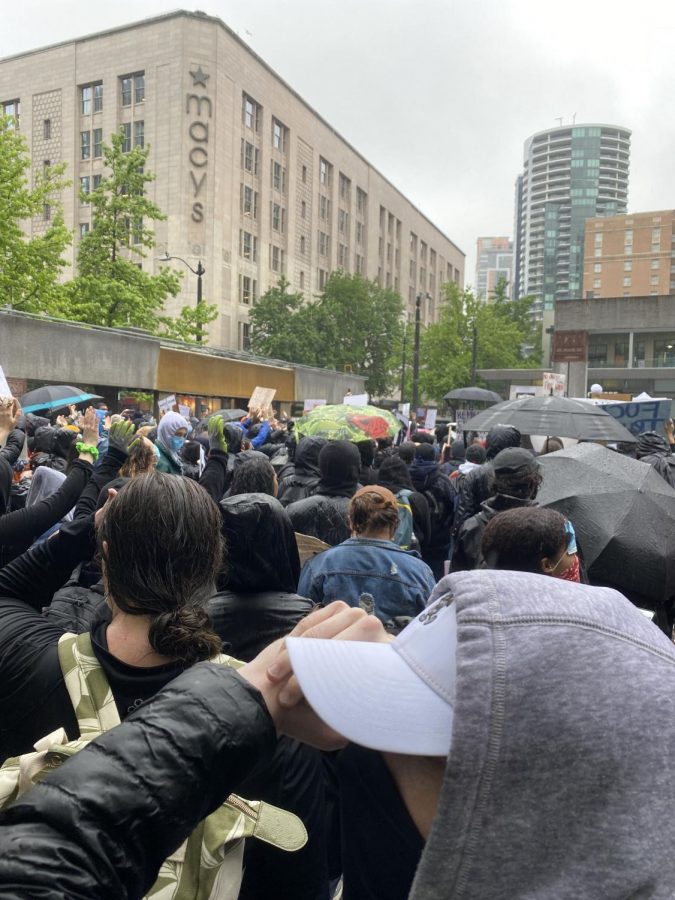 The recent murder of an African American man named George Floyd at the hands of a white police officer has exposed the deep realities that too many people in the United States, and in the Glacier Peak community, have ignored. For years, many of our school’s white people, who made up 77% of the school in the 2018-2019 school year, have lived in blissful ignorance while students of color, specifically black students, suffer. We have both consciously and subconsciously ignored the cries from fellow young people about the awful racism and bigotry that plagues Glacier Peak’s culture. More than a few students have even encouraged this horrible prejudice. Even after the incident at last year’s winter pep assembly, the racist backlash against students who just wanted to create a Black Student Union, or the social media posts from people of color who laid out specific instances of discrimination, many white students, including myself, were still quiet on the issues. We knew that racism was present under the surface, but not even “in-our-face” instances woke us up. That is flat out wrong and should have changed long ago. It most definitely needs to change now. Right now.

While this is by no means a perfect list of all the steps needed to become a good white ally to the black community, hopefully these few potential moves can put the white community on the right track.

This is one of the most crucial steps on the road to becoming actively anti-racist. Too many white people automatically raise their mental and emotional defenses when people use words like “white privilege” and “institutionalized racism” or when they talk about the Black Lives Matter movement. None of these phrases or movements are anti-white, they are anti-white supremacy. White privilege does not mean your life was necessarily easy, it just means it was not made harder because of the color of your skin. It also means that you can do things that others can not purely because of your race. Institutionalized racism means that many systems in our country, everything from the electoral process to the justice system to the education network, were built by white people to discriminate against black people and that these efforts continue today. The Black Lives Matter movement aims to make sure that all people are treated equally by drawing attention to issues that affect the African American community at disproportionate rates. Again, none of these things are anti-white. It’s time to learn and grow, not act offended when nothing offensive to white people is said.

Being open also includes actually listening to the experiences of the black community. This does not mean “listen until I hear something that I don’t agree with then interject my thoughts” or “listen but tune out halfway into the conversation”. It means actively listening to the experiences of black people and respecting their struggle as a human beings in a system that rarely values them. As white people, it’s time for us to listen and learn.

Everyone has heard the saying “honesty is the best policy”. This certainly applies to topics like race. Progress can only be made when you are honest about where you may have issues. Ignoring them does not make them go away, it just makes them grow. It’s time to confront them.

I’ll start. One of my biggest issues has not been lifting up black voices. I’m very vocal about political, social, and moral issues, and sometimes I get so loud that I wrongly drown out black and brown voices who should be heard. I need to stop doing that. Instead, I need to elevate those around me who are directly hurt by the problems at hand and ally with them to make change for the better.

Honesty can be easy. Try it.

“Education is the most powerful weapon which you can use to change the world”-Nelson Mandela, anti-apartheid activist and first black head of state of South Africa

One of the best steps toward allyship is through education. Before you even think about speaking on black issues, make sure you fully understand black history. Do you know about the richness of African culture that is perfectly exemplified by kingdoms like Ashanti and Dahomey? Do you know about the horrors of the slave trade and slavery itself? What is imperialism? Do you know what Jim Crow laws were? Do you know about the ideas behind Marcus Garvey or the business genius of Madame CJ Walker? These are just a small fraction of the issues you should learn about.

It’s also important to educate yourself on how systems, and how the people behind those systems, are presently working against the black community. The impacts of the discrimination in our institutions, which were built by and are currently maintained by many white people, are not things of the past. They are still afflicting minority groups today. Learn about how mass incarceration further limits black access to voting and how many people throughout the country have worked to make sure it stays that way. Learn about how the education system in the US operates and how it can function at the expense of black communities. Learn about how societal wrongs like sexism, classism, homophobia, and other “reasons” for discrimination can stack on each other to make the lives of black people even harder. It’s essential to learn about these modern-day structures so we can help dismantle them.

How can you accomplish this? There are thousands of different ways. Use the internet to find credible sources. Read good books and newspaper articles on the issues. Watch documentaries and TV shows that accurately depict events. If you are planning to go to college, take some African-American studies classes. Only reach out to black friends or organizations when they have explicitly stated that it is OK for you to do so. It is not the job of the black community to educate you on the racism that hurts them everyday.

4. Engage in Conversation and Activism

“The ultimate measure of a man is not where he stands in moments of comfort and convenience, but where he stands at times of challenge and controversy”-Martin Luther King Jr., civil rights leader

Before you take this step, make sure you have good intentions and are doing things the right way. Being an ally does not mean you take over the conversation, it means you use your privilege to help black and brown voices be heard and follow the guidance of black and brown people around you. Don’t ever center your activism on yourself or unrelated topics. Make sure it focuses on the issues at appropriate times, in appropriate places, and through appropriate ways.

Activism is not a one lane road. It is a multi lane highway. Not everyone may express allyship in the same way. Some people work best in protest settings while others prefer to have individual conversations with those close to them. Some would like to donate their time while others may want to help with financial resources. These are just a few examples of how you can use your voice and privilege to aid this fight. Whatever your lanes are, find them. Just make sure that your activism is real, honest, and completed under the oversight of black leaders for the purpose of empowering the black community. Saying “let me post something on Instagram then not worry about it ever again” or “I just need to sign one petition then I’m good” is not activism.

“A man who stands for nothing will fall for anything”-Malcolm X, civil rights leader

These are not the perfect five steps to take to become anti-racist. This issue is so large and so nuanced that it will require lots of effort and hundreds of thousands of steps. Being a white ally is a goal that has to be completed every single day. Continue to research, learn, and grow. Do not expect to be perfect or to have all the right answers. If you make a mistake, acknowledge it. If someone calls you out, accept it. One of the worst things you can do is decide not to speak up. Silence, which has plagued the white community and the GP community, is destructive. Fight for good and do not be quiet about evil.

Black people, and people of color in general, deserve so much better then what is happening now in our school, community, country, and world. As white people, it is our moral duty to confront racism wherever we see it, whether it be in friends or family, random strangers, or in government and business systems. When we choose not to use our privilege to end horrors like racism, it’s just as bad as if we were members of the Ku Klux Klan. We need to stop our silence and take action. If you want to create a world that is really equally, use your voice to become a true ally.

(Note: this story was edited on June 5th, 2020. Portions of the story were expanded)