Election 2020: What is Impeachment? 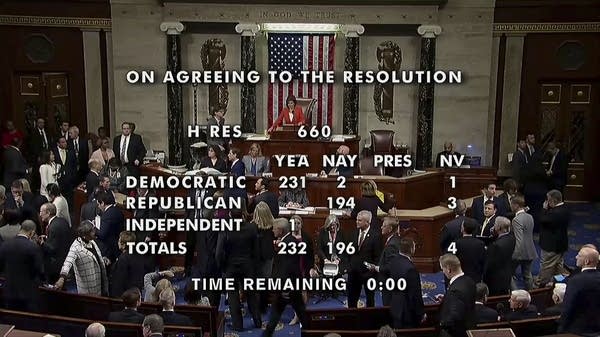 Have you read the first article in this series? If not, go back and read it.

Here is some vocab to help with understanding the technical terms in this impeachment series.

Impeachment: When the House of Representatives votes on a bill to accuse a President or a federal judge of a crime. If a President is impeached, he or she may not be removed from office (but more on that later).
Articles of Impeachment: The document that outlines what an accused official has done wrong. The constitution states that an official can be impeached for bribery, treason, or “high crimes or misdemeanors.” No one really knows what “high crimes or misdemeanors” means. The House of Representatives votes on the articles of impeachment. If the majority of members vote for impeachment, the official is impeached.

So, the President was impeached on Dec. 18. Why was he impeached and what happens next? Well, two articles of impeachment were approved against President Trump. One of them was for “Abuse of Power” and the other was for “Obstruction of Congress.”

Some say that the President misused the powers of the Presidency by asking the president of Ukraine to investigate Joe Biden’s son’s work for a Ukrainian oil company. Journalists have reported that President Trump used money that Congress set aside to aid Ukraine to entice the Ukrainian president to do what he wanted. Trump’s personal lawyer Rudy Giuliani and some  advisor European Union Ambassador Gordon Sondland worked with Ukraine to make it happen. Other members of government say that President Trump did nothing wrong and his tactics are acceptable because he is the President. Supporters of President Trump say that the aid was never withheld and that if Joe Biden’s son did something wrong, he should definitely be investigated for it.

The second article of impeachment was about “Obstruction of Congress.” Again, there is a divide on this issue. Some say that Trump ordered his advisors not to talk to investigators and made sure that they did not attend hearings. Those opposed to this article say that White House executives made that decision on their own. They also say that they did not have to cooperate with the investigation because of how partisan, or one-sided, the entire hearing is. They say that some Democrats have wanted the President impeached since he was elected and this is just another attempt to make him look bad.

What happens next? The entire details are unclear. The articles of impeachment were supported solely by Democrats and one person who has no party affiliation. They were opposed by all the Republicans and by a few Democrats. So there is a big divide on the issue. America is also divided, with exactly 50% of people in support of impeachment. And almost no one is budging.

Now a trial will be held in the Senate to decide if Trump should be removed from office or not. He probably will not be removed. In order for him to be removed, 2/3 of the Senate has to vote to remove him. That means 67 senators have to vote in favor of removal, and there are only 47 Democrats in the Senate. Can they convince 20 Republicans to support impeachment? That’s pretty unlikely.

Finally, how does this affect the 2020 election? For starters, many Democratic senators like Elizabeth Warren, Bernie Sanders, Amy Klobuchar, and Corey Booker will have to get off the campaign trail and head to Washington for the impeachment trial. And with the first primary elections only two months away, (What’s happening with this? More on that in the next article), it may hurt their chances at winning the Democratic nomination. But impeachment may affect Donald Trump’s chance at reelection as well. The American people will be the final judges of Trump’s conduct. Since the Senate probably won’t remove him, you as a voter will have to decide if Trump should be voted out because of his Ukrainian dealings.