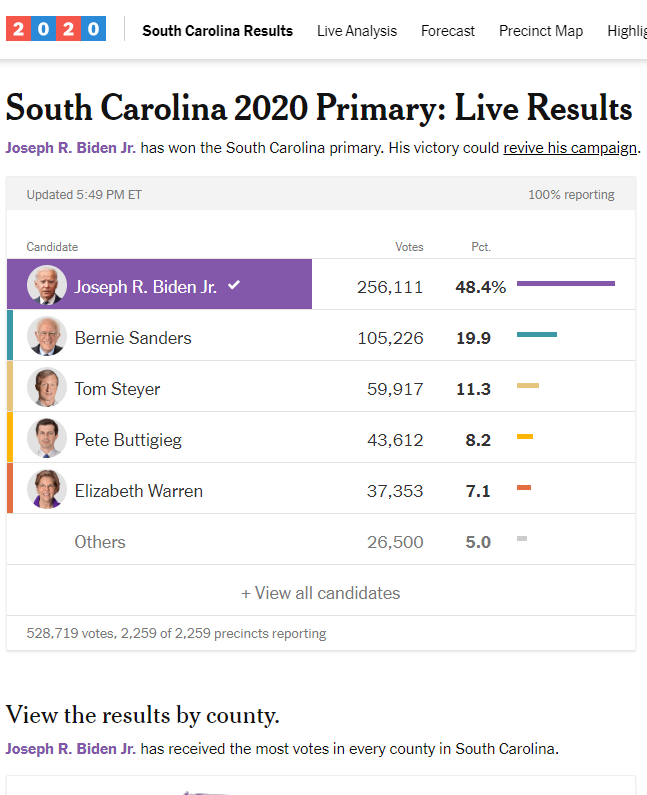 A screenshot of the South Carolina primary results. credit: The New York Times

Here is some vocab you may need to know:

Primary race: Members of a party vote to decide who they want to run against members of the parties in an election.
State primary: Members of a party in an individual state or territory vote to choose who they want to run against the other parties in an election.
Caucus: Like a primary, but there are a few key differences. Instead of submitting a written ballot, states that use a caucus system have their party members stand by a table labeled with the name of their preferred candidate. Election officials count all of the people at an individual table. The table with the most party members standing by them wins.
Party convention: A large meeting of party members across the country. At this convention, each party will nominate a presidential candidate and a vice presidential candidate based on the number of delegates they get from the primary and caucus elections.
Nominee: A party’s nominee will run against the other parties in a general election for the actual office. For example, if Bernie Sanders is the nominee, he will run against President Trump in the general election.
Party delegates: Members of a party who go to the party convention to vote on the party nominee for president and vice president. Members will vote for who their state voted for. To really generalize the process, let’s look at the New Hampshire primary. This state is only worth 24 delegates because it is a small state with a small population. Bernie Sanders won 25.7% of the vote, so at the Democratic party convention nine delegates from New Hampshire will vote to nominate Sanders. Pete Buttigieg won 24.4% of the vote and will also get 9 delegates. Finally, Amy Klobuchar won 19.8% of the vote and will get 6 delegates. The rest of the candidates like Joe Biden and Elizabeth Warren get zero delegates even though they won around 10% because you need to reach at least 15% to be able to get delegates.
Super-delegates: These delegates are different then normal party delegates. Super-delegates are important members of a party like donors, executives, etc. who can cast a vote for a nominee without considering who their state votes for. That means they can vote for whoever they want. Only the Democratic party has these types of delegates.

I know that the primary process is complicated, and has a lot of vocab that goes along with it, but it is one of the key parts in the election process. This Democratic presidential primary has been a long one and there is still a lot more drama waiting to unfold. Out of the 24 candidates who announced that they were running, only eight are left. And that number may decrease soon. Candidates like Bernie Sanders, Pete Buttigieg and Joe Biden who have won elections (Sanders won the New Hampshire primary by 1.3% and the Nevada caucus by 26.6%; Buttigieg may have won the Iowa caucus by 0.2% but exact numbers are still being totaled; Biden won the South Carolina with just about 50% of the vote) may still have a chance, depending on their fundraising and their performance in other races. As the race continues, under-performing candidates like Elizabeth Warren, Tom Steyer and Amy Klobuchar may drop out if they fail to secure a stronger footing and more delegates.

With that being said, Super Tuesday will make or break a candidate’s chance at the nomination.

What is Super Tuesday and why is it important? During Super Tuesday, fourteen of some the biggest states vote. Just about 1400 delegates, or one third of the delegate total, are up for grabs. If a Democratic candidate performs well during Super Tuesday, they may be well on their way to reaching the “magic number” of delegates they need to secure the nomination at the convention: 1991. Additionally, Super Tuesday states have a wide range of people voting in them. The first four early states, Iowa, New Hampshire, Nevada and South Carolina are relatively small states compared to California and Texas who vote Tuesday. And the first four states have a lot less diversity than the Super Tuesday states. So, not only does it offer candidates a lot of delegates, but it also offers them a chance to show voters that they have a diverse appeal to many different people groups.

Biden and Sanders are almost tied in polling from big states like Texas. And while Sanders is winning in California, Biden is winning in Virginia and North Carolina. So can we really confidently make predictions for who will come out on top Tuesday? Probably not. Maybe some candidates like Klobuchar, Buttigieg, or Warren will drop out and help either Biden or Sanders get to the top. Maybe the polls are wrong and Biden or Sanders are doing better then we think. At this point, we just have to wait and see what the race holds.

If you’re interested in seeing some polling data that is easy to read and has some cool graphics, I would recommend looking at FiveThirtyEight.com. They put together a huge poll list and run computer simulations off the polls to predict how each candidate could do. You can access that data here.