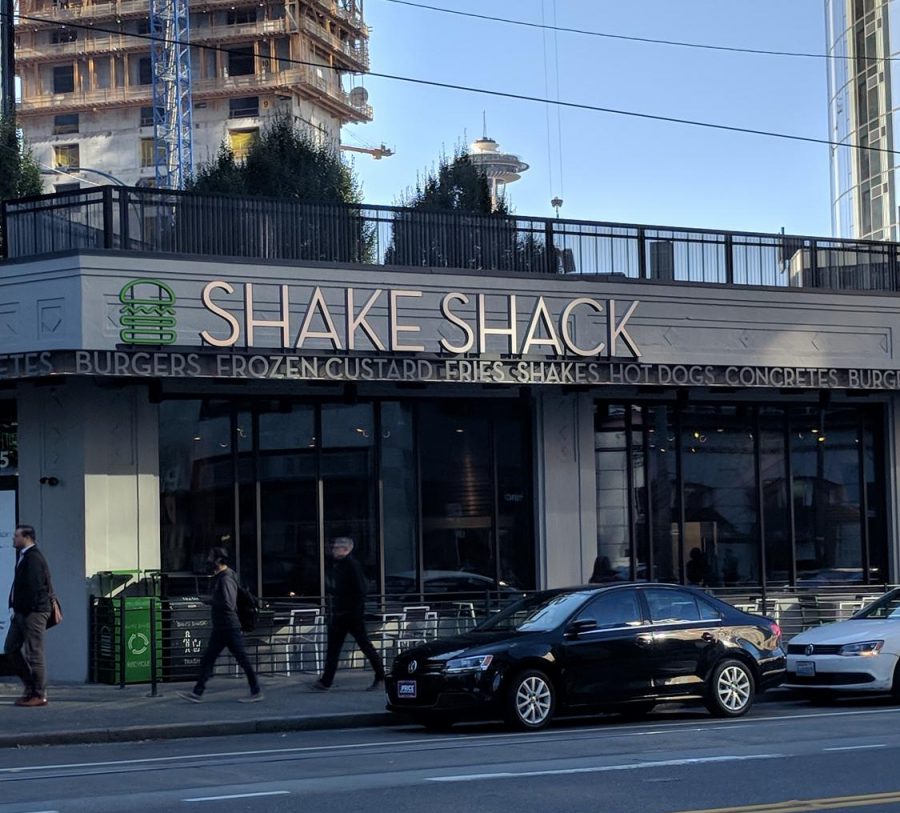 The new Shake Shack storefront with a view of the Space Needle.

Shake Shack is finally in Seattle. The hit New York burger chain opened it’s doors at 2115 Westlake Ave on Oct. 11. Food enthusiasts from all over the city flocked to the site to try some of their legendary burgers and world-famous custards.

The restaurant is very trendy and well laid out. The company has decided to use tablets instead of cashiers to place orders. The interface of the tablets is very easy to use, and you can make substitutions and changes to your order at the click of a button.

At almost every turn, I encountered a worker who asked if I need any assistance. The kitchen is very well staffed, so food is usually on your table in ten minutes or less.

Food and drink options are as abundant as the staff. They offer burgers of all kinds, including a mushroom burger. All their buns can also be substituted for a gluten free version. Along with the traditional options for a burger joint, the chain also serves hot dogs and chicken sandwiches.

During my visit, I opted for the SmokeShack burger, the signature crinkle fries, and the chocolate Shack Attack frozen custard.

The burger was one of the best I have ever had. The meat was tender and juicy, and the lettuce was fresh and crisp. Usually, this burger would come with a thick slice of bacon, but I had that taken off. One of the best parts of the burger was the chopped cherry peppers that they mix into their famous burger sauce. The peppers added a nice kick but were mellowed by the tangy sauce.

The fries were crispy on the outside but soft and chewy on the inside. They were also very well-seasoned.

The custard was probably the highlight of the meal. It was rich and creamy but easily melts in your math. You can also add in all sorts of candy bars, pastries, and other sweets. If you only try one thing at Shake Shack, you must get a frozen custard.

Shake Shack is one of the best burgers you can find in the Seattle area, and you definitely need to try it yourself.