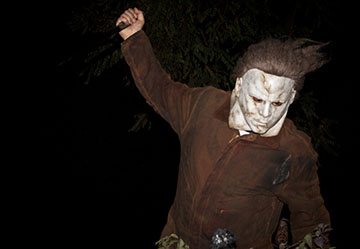 Michael Meyers on his murder spree.

In October in the year 1978, Laurie Strode is just an average high schooler, but on Halloween night, that will all change.

Michael Meyers, the main antagonist had his first kill fifteen years ago when he killed his sister. The movie opens as he is being escorted to Smith’s Grove Sanitarium and he escapes from the guards. Michael is known for being the masked killer. He stalks Laurie Strode throughout the day and at night he starts his murder spree.

He kills characters Annie, Bob, and Lynda. Strode comes face to face with the masked killer and she barely escapes the knife. Loomis, his psychiatrist, shoots Michael six times and falls off the balcony but much to his dismay, Michael escapes. Now, 40 years later, he has returned, but Laurie is ready, and she is out for blood.

In the beginning, a man and woman named Aaron Korey and Dana Haines want to interview Michael but Dr. Ranbir Sartain, who has been his psychiatrist since the 1978 murder spree, tells them he wishes to not speak. They then go to Laurie and ask to interview her, and she declines. Suddenly, the bus that was taking patients crashes and the guards are killed and Michael once again escapes. The next morning is Halloween and as suspected,he begins to kill again.  Strangely, he also calls the police.

Laurie hears the call on her CB radio and rushes to the house, only to find two more bodies. Laurie and Michael begin to fight to the death and the final scene ends with Laurie setting fire to her home with Michael in it. As the credits begin to roll, the audience can hear his breathing. These two movies connect together well. , The continuation of the story line is seamless.