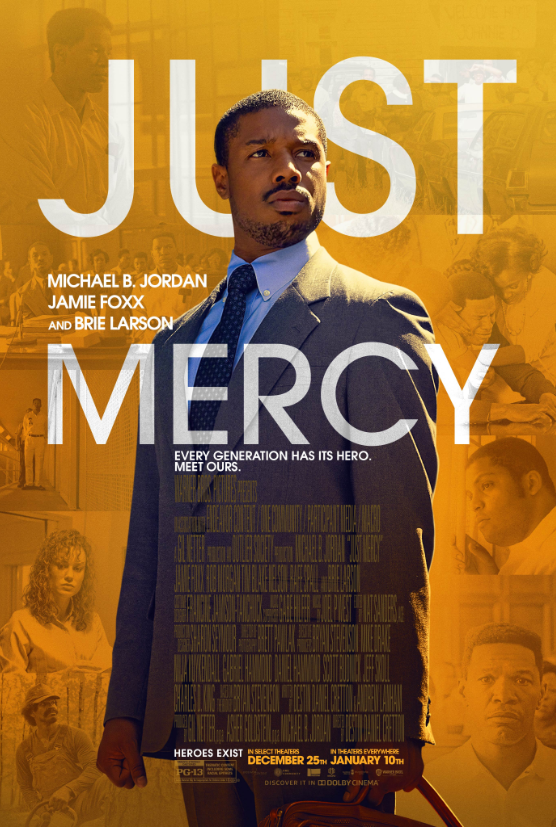 Death Row is something a lot of people do not dwell on. The death penalty is always subject for debate. Will we ever see inside the prison, do we know who these people are? What if they are wrongly accused? How should we think about the death penalty and Death Row? Just Mercy is a story based on real events, real people and real stories and experiences.

Harvard graduate, Bryan Stevenson (Michael B. Jordan), moves to Alabama in pursuit to help those who cannot afford proper representation, and helping the people on Death Row. Stevenson learns that the south is a lot different than the east coast, even the 1980s. He works alongside with Eva Ansley (Brie Lawson). Together they create the Equal Justice Initiative. One of Stevenson’s first cases was Walter McMillian (Jamie Foxx), an African-American man who was put on Death Row for the murder of 18-year-old Ronda Morrison. Stevenson worked on his case to prove McMillian was innocent. Throughout the whole story, racism was evident in ways that Stevenson had never experienced before.

Since the movie is based on true stories and events, the actors had to be one with their character to make them authentic.  Eva Ansley was a side character but she was a vital in her support and work towards the cases.

“This is a mom who noticed something that was happening in her community, and nothing was going to stop her from rectifying the situation in whatever way she could,” Lawson said.

“It was identifying with our hearts being similar, and our spirits and our intentions and our morals aligned. It was cool to see a little bit of myself in him [Stevenson]. And once that part connected for me, I felt a little more comfortable about taking on this challenge,” said Jordan.

This movie was an eye-opening, powerful story about Death Row and injustice.