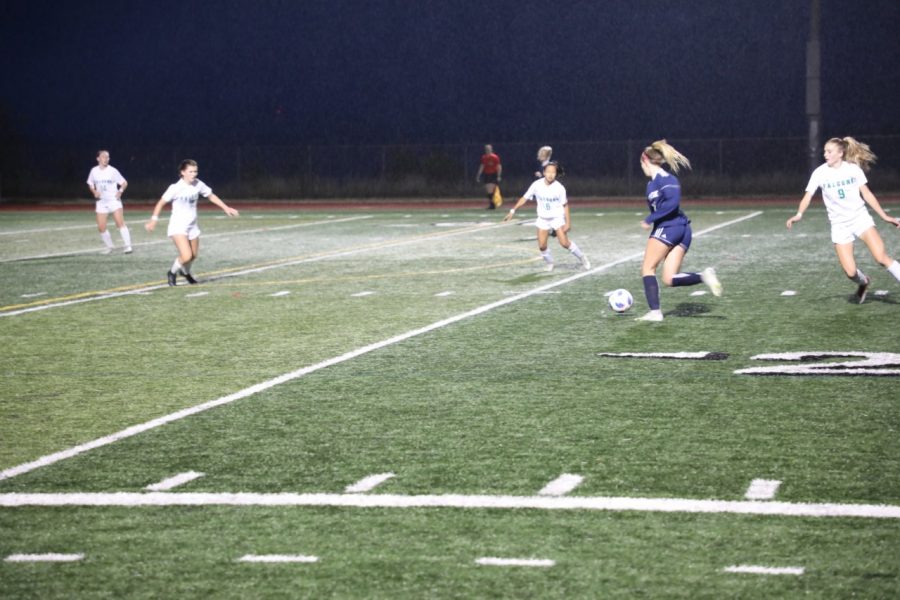 On Friday night, the GP girls’ varsity soccer team beat Woodinville High School one to nil after a great goal from Ryann Reynolds in the 15th minute. Things started off strong for the Griz, as they were attacking and controlling possession from the opening kick-off. A goal seemed inevitable with the way the offense was playing, and as the rain just began to fall, it was Reynolds who buried one past the diving Falcons keeper. “It’s always a good feeling to score a goal especially in close games and against good opponents,” said Reynolds. Fans and players alike knew that the rain would come, but when it started coming down, nobody could have guessed what happened. With about 10 minutes left in the first half, the heavens opened and a downpour of epic proportions began. Umbrellas went up in the stands and the yearbook team scrambled to get rain covers on cameras. The final few minutes came and went as the rain fell in buckets. At the half, most fans flocked for the exits, but the committed few journeyed down to the fence separating the field from the stands to form de-facto supporters’ section. The GP canopy began to fall partway through halftime, and four lucky supporters, including sophomore Karsten Sweum, were called upon to stand under the canopy and hold it up. “This was some of the worst weather I’ve ever seen,” said Sweum. The second half began with no stop to the weather in sight, but the players and fans seemed to be having a fun time. Chants of “you can’t do that!” rang out after fouls, and barking during Woodinville throw-ins showed that the weather was not stopping passionate soccer fans. The GP defense held strong throughout the second half, and thwarted any chances the Falcons brought to the table. “The rain was definitely a little challenging but you just have to play through it and make the best of it,” said Ryann Reynolds of the treacherous conditions. The game ended 1-0 after 4 minutes of stoppage time which felt like an eternity to me on the sideline (I was seriously underdressed and had no raincoat.) The Griz played a great game with some of the worst weather players had ever seen. “The worst weather I’ve ever played in was snow because it was so cold and slippery. The rain affected me because the ball would skid and it was super slick, the rain also made it really hard to see,” said sophomore Madison Stumpf. “I’ve been playing since I was 4 and I’ve had to deal with weather like this many times with more wind that has knocked me over and in muddy grass. It definitely changes the game but it does that for everyone and you hope your team gets the win out of it,” said Ella Seelhoff.