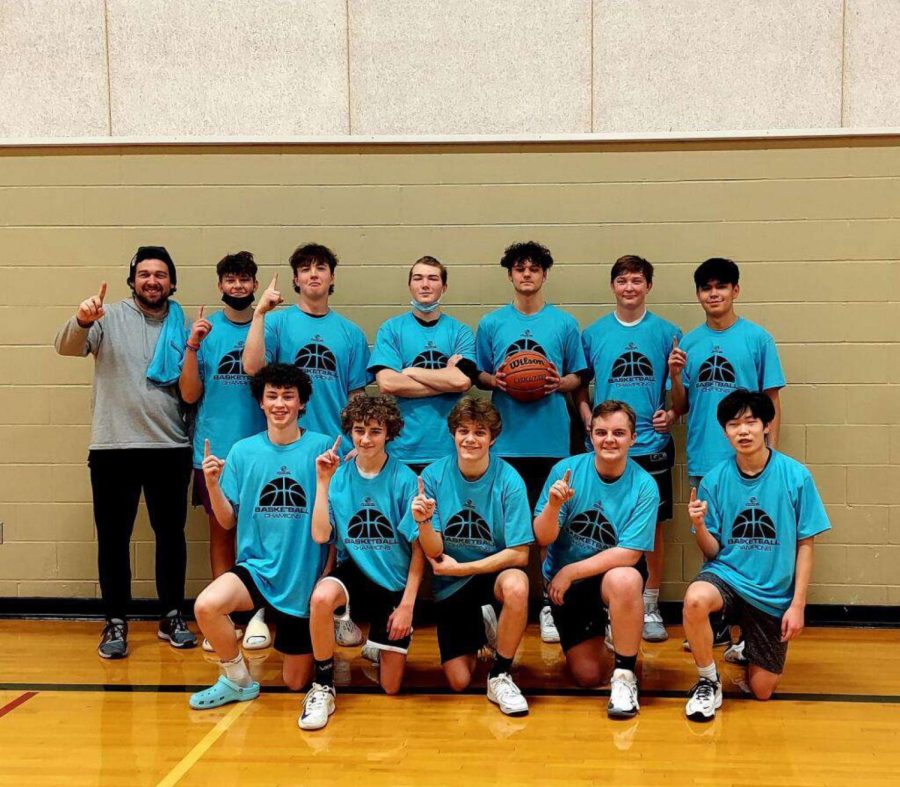 The MegaToads roster after winning the championship

It’s February 28, 2020. In two weeks, the entire world will be shut down due to the COVID pandemic. But for now, everything seems normal.

A group of now-sophomore boys are gathered at the Snohomish Boys and Girls Club to watch former GP senior Nathan Peters, son of Mr. Peters, play in a rec league basketball game. Peters, along with the team’s coach Colten Linder, were Young Life leaders for the boys.

Two years later, Colten told those same boys that he’d coach if they put together a team. From there it was on. It began with a group chat on Instagram simply titled “basketball” where interested sophomores would be added.

Once the final roster was determined, it was time to pick a name for the team. Karsten Sweum first proposed the name “Huskers,” like the University of Nebraska’s team name. When that idea was shut down, Sweum found a free logo of a frog. From there, he implemented GP colors into the logo and thus the Glacier Peak MegaToads were born.

While the end goal was to win a championship, the Toads wanted to make sure they were having a good time in the process. They took video clips from their first practices and formed highlight reels which they posted on their Instagram account.

The first major shakeup for the Toads was the loss of Kyler Jensen. Jensen broke his collarbone in a skiing accident only days into the season, rendering him out for the entire season. The team was now down a member, and knew they’d be missing others, as Karsten often had prior commitments and was only able to play a few games during the season.

The Toads also decided they’d select one player of the game from each matchup across the season, whether it be a player who had a big game or a clutch play to help secure a win.

The first game of the season sent the Toads to Mukilteo, where they took care of business and won 58-41. Drew Jansen was selected as the player of the game after putting 10 points on the score sheet in the opener. “I was glad that Drew hit some shots and was player of the game,” Dylan Groenier said. “The court we played on was pretty nice, one of the better ones we’ve played on,” Ethan Dayton and Kyler Jensen said.

Unfortunately, the second game of the season was postponed as the league was suspended for one week due to rising covid cases. The Toads returned on January 22 with a home opener worth watching, as the Toads rolled to a convincing 51-13 victory. Caleb Kim had a big day, scoring 15 points in route to being selected as player of the game. “Game was ez,” Caleb Eckerlin said.

One week later, it was the Caleb and Caleb show as the Toads faced adverse conditions playing in Alderwood. The court was slippery, and the gym was dark, but the toads came out on top in a defensive grudge match as Caleb Kim won his second consecutive POTG award, scoring over half the team’s points. The Toads would hang on to win 33-22, but the Alderwood squad made it interesting at the end. “The court we played on was terrible, and honestly we played like absolute trash. Definitely an ugly win,” Dylan Groenier said.

It was survive and advance in the Toads first go at Alderwood, but the second time around offered a much different performance from the then 3-0 squad. Defense was at a premium as shot after shot fell for both the Toads and their opponents. Karsten Sweum had a beautiful fading bucket off a coast-to-coast rebound that eventually iced the game in the Toads favor, as they coasted to a 72-41 win on the road.

Next on the slate was a matchup at Monroe, one that would be a homecoming of sorts for coach Linder, as he is a teacher at Monroe and many of the opposing players were his students. Only days before the game, a text from Colten reached the group chat: “League director just asked us if we wanted to play a double on Saturday. Game would be at 1pm,” Linder’s text said. What was expected to be another routine game would be very different, however.

The MegaToads were short handed for the Everett matchup, with only seven players coming out for the matchup. What ensued was one of the best games of the season, as two good teams coupled with some questionable reffing decisions led to a back and forth classic. After a Drew Jansen bucket was ruled a two-point shot, the Toads were all tied up with the Everett squad in overtime. It was winning time, and Caleb Eckerlin made the most of it, knocking down the game winning three to secure a 53-50 victory in an instant classic matchup. “It was pretty awesome, I dropped 30 on ‘em,” Eckerlin said of his performance.

It was right back on the road for the Toads, as they had to prepare for their original matchup for that day against Monroe. An already hyped Toads squad had a good time and rolled in Monroe, taking a blowout 63-14 win. Karsten Sweum had the play of the game after firing a long pass down court for a bucket, then motioning to the bench with a sniper celebration.

The final regular season home matchup for the Toads went off without a hitch, as they put up a season high 75 points in a 40-point win. Dylan Groenier was selected as player of the game as he cleaned the glass all day long, dominating the rebound game. “The game was a total block party, Dylan was dominating all game,” Karsten Sweum said.

The regular season ended in Alderwood, and Ben Williams was called upon to play for the Toads as a replacement. Williams put up a solid 11 points as the Toads closed out the regular season with a 63-16 win. Coach Colten forced ben to switch up his name, claiming “having someone named Ben on the team [was] bad for morale.” Ben chose Ron Swanson as his name, poaching it from the star of NBC’s Parks and Recreation.

The Toads claimed the top spot into the playoffs and were slated with a Tuesday rematch of their regular season finale, this time in Snohomish. Unfortunately, on the morning of the game the Alderwood team was forced to forfeit due to a lack of players, meaning the Toads would not return home again during the season.

The semifinal matchup happened on Friday, Mar 4 back in Everett, as the Toads rematched with the Mukilteo opponent they took on in the season opener. GP students came out in mass to support the Toads, and they were treated to a classic. The game was back and forth, with Mukilteo’s best player giving the Toads fits all day long, and with only two minutes to go, all seemed lost for the Toads. Trailing 40-35, one whistle shifted the momentum as Mukilteo’s star player fouled out. The ensuing possession saw Tanner Johnson bury a three to reduce the deficient to two points. A stop on defense and two made free throws meant the game was tied with only 30 seconds to go. After a steal on defense, tanner Johnson sent the crowd into chaos as he delivered a behind the back pass in transition to Ryder Troupe who hit the layup and drew the foul. “When their guy fouled out and Ryder hit that shot it felt like there was a sudden mood swing and a boost of energy,” Ben Williams said of the rally. The rally continued as the Toads finished the game on a 12-2 run as they punched their ticket to the title game, where they would take on the Everett squad who took them to the wire earlier in the season. “The comeback in that game was so exciting,” Allie Jansen said. “When the guys started scoring it felt like the energy in the gym started to go up. It was really cool to be a part of that and to celebrate.

The championship game was expected to be a tight, back and forth battle between the two best teams, but the Toads decided otherwise. They controlled the pace from the tip off and ended up taking it 68-41. Austen Blume excelled in relief, scoring 29 points to power the Toads

The Toads were officially crowned league champions finishing the year at 11-0 after facing much turmoil. From canceled games to season ending injuries, the Toads faced it all in route to perfection.