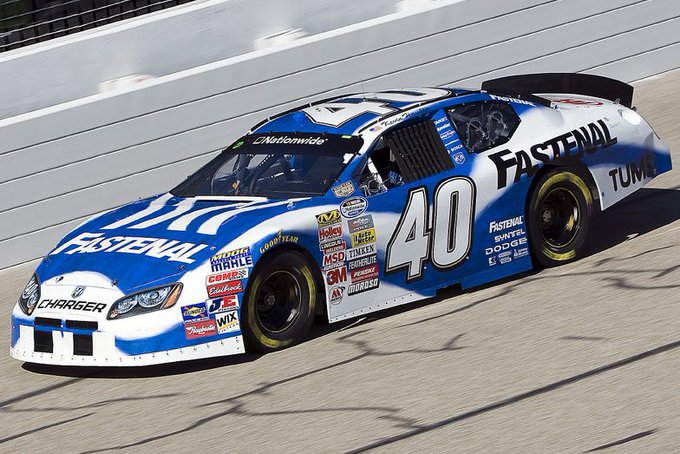 On June 30, 2019, Alex Bowman took his first career Nascar Cup Series victory at the Chicagoland Speedway in Joliet, IL. But what many don’t know is that a hometown guy from Snohomish was on that team. From high atop the grandstands Kevin Hamlin spotted for Bowman on his way to the victory.

“Alex Bowman has finished in every position in the Nascar Cup Series; Second through Forty-Third. But he’s never finished first. Making his way through the final turn, Alex Bowman will win in Chicago!” Said Rick Allen of NBC.

Kevin grew up here in Snohomish and was born into a racing family.

“My mom and dad met at Evergreen Speedway in Monroe in the late 70’s and I was there when I was just three days old. Never really had a choice or wanted to do anything else, it’s just in my blood.” said Kevin.

Kevin grew up racing quarter midgets around the area, and then moved up to the local division at Evergreen and on to the Northwest tour before moving to North Carolina.

“I really miss just being with friends and racing for fun. When I drove, for my experience, racing wasn’t as much fun as it was a job. Back home, it was me, my parents, my girlfriend (now wife), and all my best buddies from high school.”

Kevin’s greatest influence is his father, whom he has learned things from when it comes to racing that Kevin still uses when working with young drivers to this day.

In his early 20’s, Kevin made the move that most young drivers need to make to continue pursuing a career in racing: moving to North Carolina. A hub of all things racing, North Carolina is home to almost everything when it comes to Nascar.

“As a family we always wanted to move back east to race, but I didn’t make the plunge till we were in our early 20’s. Credit goes to my wife Mandi on that one, I asked one day if she’d move to North Carolina with me to chase the racing dream and she never hesitated and said yes. If you want to be an actor, you move to Hollywood and at the time, if you wanted to be a race car driver you went to North Carolina so that’s what we did.”

Upon arrival in NC, Kevin was able to secure rides in the Nascar Xfinity (formerly Nationwide) Series and Nascar Craftsman Truck Series.

“I was very fortunate to get the opportunity to run trucks and Xfinity series, but I also could’ve had more help in certain areas (an agent, a driving coach) and I didn’t have them. I worked hard, got lucky and got an opportunity but honestly I wish I would have done some things differently knowing what I know now.”

After many years driving in Nascar’s lower series, Kevin’s driving career was coming to an end. But it wasn’t the end of his time in Nascar. He had the option of becoming a spotter. A spotter usually stands on top of the grandstands in a special “Spotters stand” and watches the race for one driver to relay information on what’s going on around the track. Think of a spotter as a driver’s eyes in the sky.

“I knew my driving career was about up, and I had spotted here and there so I had a feel for it, and those drivers I’d spotted for said I did a good job. I still wanted to compete and help a team win, and for me that was going to be a spotter. I feel like being a former driver helps spot; when to say something, when not to say something. I use the analogy that I’m like a retired quarterback that’s now an offensive coordinator/ quarterback coach.” Said Hamlin

Hamlin spotted for Clint Bowyer at Richard Childress Racing for a few years while spotting for some truck drivers as well. But in 2012 he was offered a job from another local guy, Kasey Kahne, who is from Enumclaw.

“Kasey offered me a job in 2012 when I was at Richard Childress Racing. I was with Clint Bowyer, who was leaving to go to Michael Waltrip Racing. I didn’t end up going with Clint so I just spotted for a truck. Kasey needed someone ¼ of the way through 2012 so he called me and I was with him up until he left HMS in 2017.”

Kevin then became the spotter for Alex Bowman in the 88 car, where he remains to this day. When Alex got his first win at Chicago in 2019, Kevin was talking him through it all.

“That win was really special. We came close at Kansas earlier in the year and lost, but I think losing that race taught us how to win in Chicago. The new mile-and-a-half package the cars have makes it hard to spot, hold people off, and we didn’t do that well in Kansas. We lost the lead in Chicago, and I just told Alex “you’re fine, we’ve got time to get it back.” and in about five laps he did and we pulled away for the win. Was a really cool race, one of my favorites to this day.” Said Kevin

Kevin and the 88 team were able to win again in Fontana, California in March of 2020, just weeks before the pandemic put Nascar, and all other sports, on hiatus. Kevin’s race day routine has changed greatly with Nascar’s COVID restrictions.

“Right now, with COVID it’s a lot of rental car sitting. We have to check in at the track about five hours before the race, and we’re not allowed in the garage area like we used to be. So we get there, check in, sit in the car until about an hour before the race and then go up and get our stuff ready. Pit road sheets, radios, etc, and try to prep for the race ahead.”

Kevin currently spots for Alex Bowman of Hendrick Motorsports in the Nascar Cup Series and Justin Haley of Kaulig Racing in the Nascar Xfinity Series. This hometown guy was able to pull off his dream.